I co-launched with Nicky Hager  and Blaž Zgaga

the initiative Speak Up for Assange 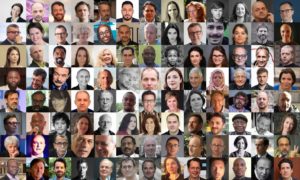 Read the statement, subscribed by many hundreds from 99 countries

Julian Assange, founder and publisher of WikiLeaks, is currently detained in Belmarsh high-security prison in the United Kingdom and faces extradition to the United States and criminal prosecution under the Espionage Act. He risks up to 175 years imprisonment for his part in making public the leak of US military documents from Afghanistan and Iraq, and a trove of US State Department cables. The ‘War Diaries’ provided evidence that the US Government misled the public about activities in Afghanistan and Iraq and committed war crimes.(…..)

if you work in a journalism-related role*

Along with Catherine Riva, I co-founded a nonprofit organization for

My currently on-going investigation has been recognized with the 2016 Media Promotion Prize,

an award for scientific value and public interest by the Swiss Academy of Medical Sciences.

Just married! investigativ.ch and swissinvestigations.net got together. Finally the Swiss investigative journalists have a common house, regardless of the language they speak.